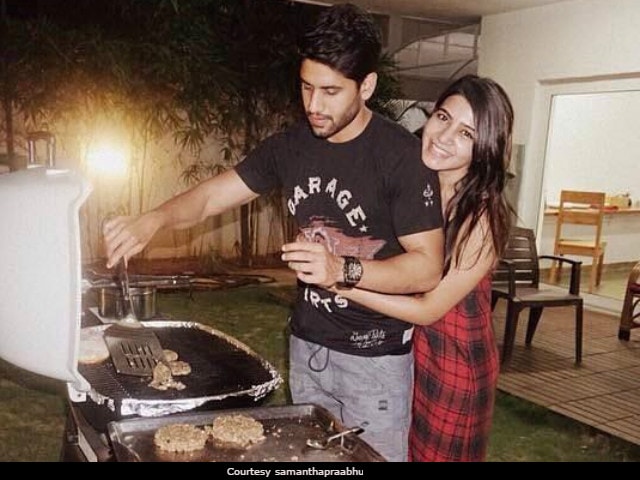 Star couple Samantha Ruth Prabhu and Naga Chaitanya partied with friends and family in a private arrangement recently, pictures of which have been shared on social media and are going viral. In the pictures, actress Samantha can be seen accompanying the 30-year-old actor, who is busy at the barbeque. The spotlight was on Samantha, who was casually dressed in a black and red maxi while her fiance was spotted in denims and a tee. The pictures from inside the party show that the barbeque kept 'chef' Naga Chaitanya indeed very busy while Samantha shuttled between attending the guests and helping the actor.
Let's go inside Samantha Ruth Prabhu and Naga Chaitanya's weekend party:

The south stars got engaged in a splendid and star-studded ceremony in January this year and are reportedly looking forward to a destination wedding. Naga Chaityana, the younger son of Telugu superstar Nagarjuna Akkineni and Lakshmi Ramanaidu Daggubati, met Samantha, 30, while filming 2010's Ye Maaya Chesave - their first movie together. They are also co-stars of Manam and Autonagar Suriya, both released in 2014.
Earlier in an interview, Naga Chaitanya was asked about his wedding plans when he told IANS, "I'm a very private person and I never felt the need to speak about my relationship in public. My friends have known about it for a long time. Then, when we informed our families, they supported our decision."
Samantha Ruth Prabhu has a packed roster this year with movies like Irumbu Thirai, Aneethi Kathaigal, Raju Gari Gadhi 2 and Vijay 61 in the pipeline. Meanwhile, Naga Chaitanya is currently shooting for Ra Randoi Veduka Chudham and will soon be seen in NC14.